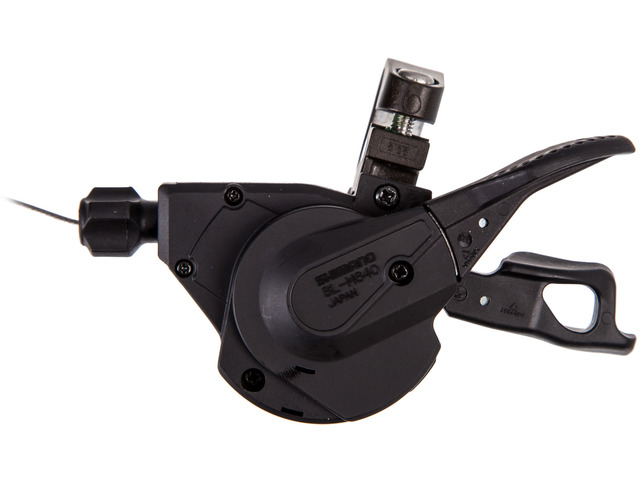 The Shimano ZEE shifter SL-M640 (only 10-speed) has already proven itself in Downhill races and has an ergonomic lever with a non-slip texture. It is attached to the handlebars with a clamp. As a Rapidfire Plus shifter, which allows you to shift down up to three gears at once, the SL-M640 also features 2-Way Release Technology. This enables the shift cable to be released both by pulling with the index finger and by pressing with the thumb. The ZEE shifter has an aluminium housing and levers made of plastic or steel.

2-Way Release
All newer Rapidfire Plus shift levers are equipped with 2-way release (release in two directions). This means that the shift cable is released by pulling with the index finger or pressing with the thumb.

You have questions regarding a product?

Give us your opinion on this product.

I can only compare it to an 10sp deore and 9sp XT, and can easily say that it shifts better than both. shorter paddles are great too, much beter ergonomics.
If you're running 1x10 on a budget definitely get this, if not Saint is the best option for rear shifting IMO.

Is this review helpful?

Give us your opinion on this product.

Anything your bike needs, we’ll make it happen

Send your unused goods back within 100 days after purchase and get your money back!

All prices are in Euro and excl. MwSt plus shipping cost to the delivery destination: USA.